This how to contains a guide for configuring statistics in unbound.
Below, statistics with Munin and Cacti is shown.
Other systems than the ones listed here are possible, this is an example.

Unbound has an option to enable extended statistics collection.
If enabled, more statistics are collected, for example what types of
queries are sent to the resolver. Otherwise, only the total number of
queries is collected.

Various graphing tools expect the counters to go up over time. Some may
expect counters to be reset to 0 since the previous statistics printout.
The statistics-cumulative option controls unbounds behaviour.
By default it is set to no, which resets values to zero after
stat printout.

In the contrib directory in the source of unbound is the
unbound_munin_ plugin script. It can be used with munin
to monitor the health of an unbound server.

Install munin and munin-node with the appropriate package install tool. The
plugin script for unbound can be copied somewhere on the system (such as
in the unbound directory). Then create symbolic links
from /etc/munin/plugins to that file.

In the /etc/munin/plugin-conf.d/plugins.conf file you can setup the
unbound munin plugin. Below are the default values. Set the correct
values for your system. The statefile is a temporary file.

Restart the munin-node daemon. Munin will automatically pick up the new
graph and plot it with rrdtool.

Additional graphs are possible, below is
a list of them, and examples. Create (additional) symbolic links
to unbound_munin_ with the names (in bold) of those graphs
to enable their display. Several require that
extended-statistics is enabled in config. Pictures included
are samples, your statistics may look different :-) . 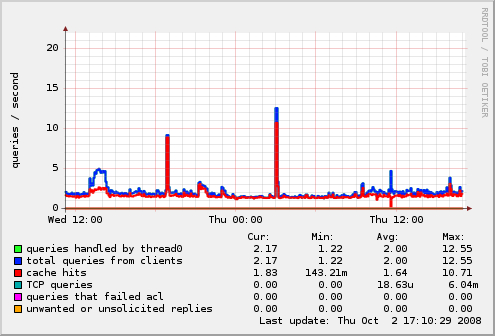 A sharp increase in unwanted traffic indicates a possible spoof run in progress. 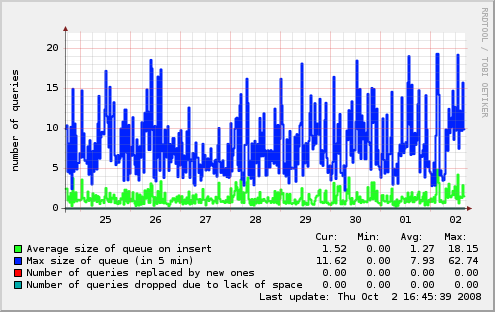 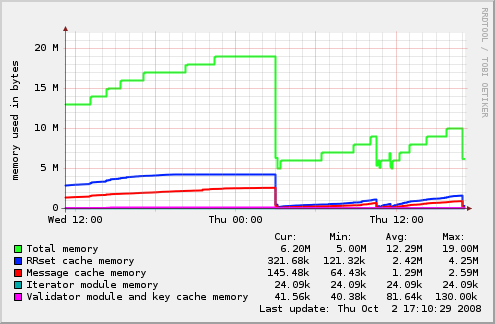 You can see that the server was restarted during the day. 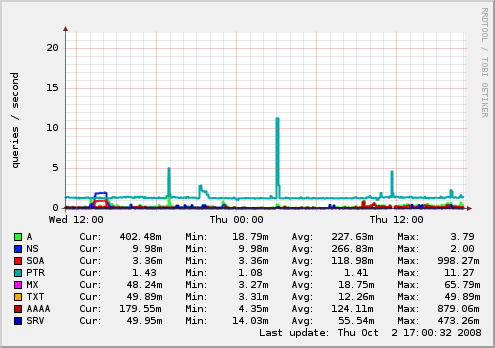 The types received are shown. 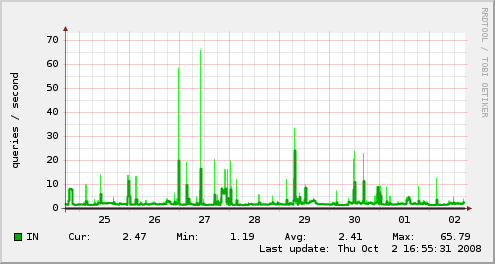 Usually only IN (internet) class. 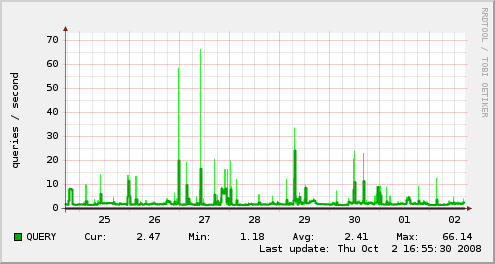 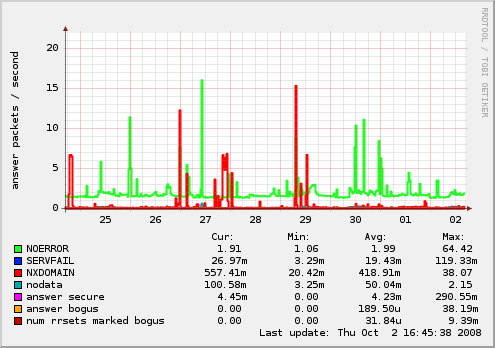 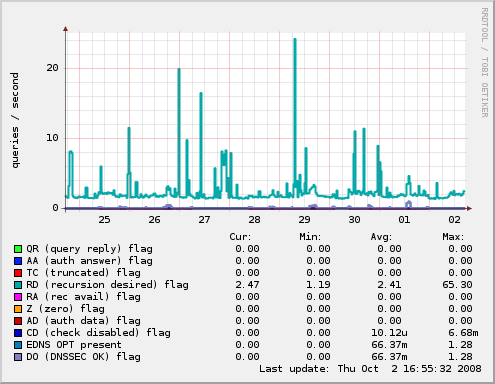 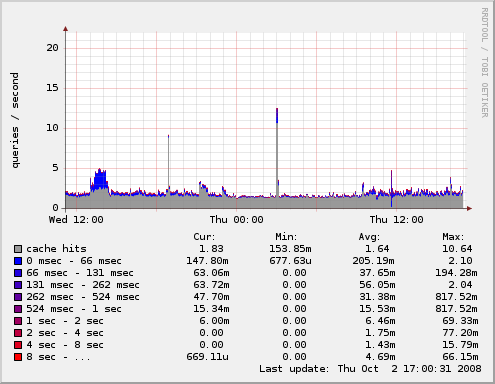 The setup is described in the README in the tarball in the unbound source
contrib directory:
contrib/unbound_cacti.tar.gz
(contributed by Dmitriy Demidov). Updated versions may be found
here (lissyara.su). 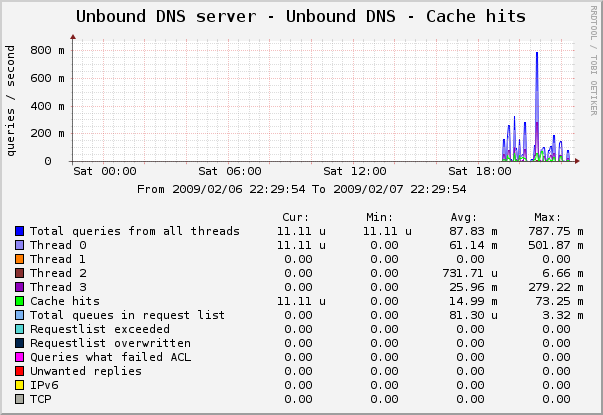 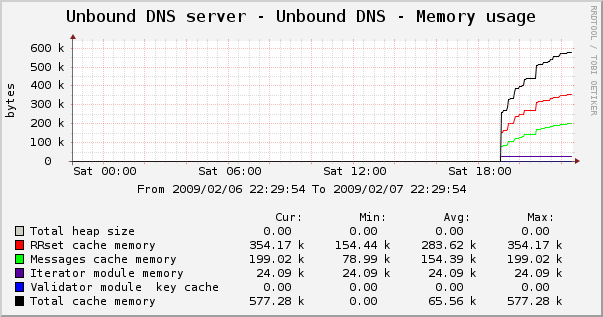 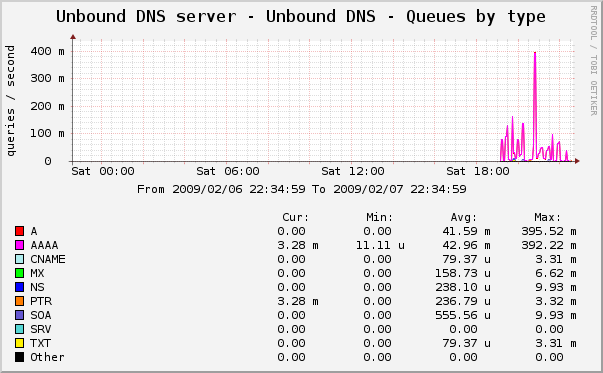 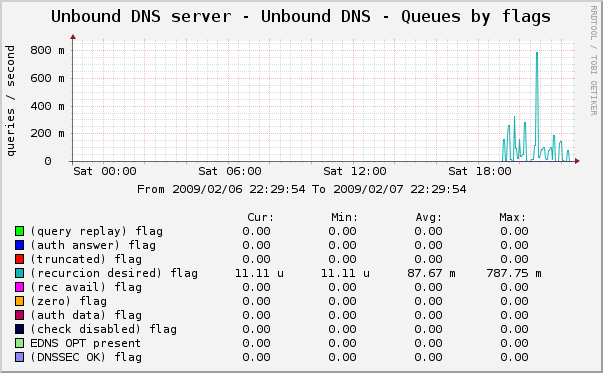 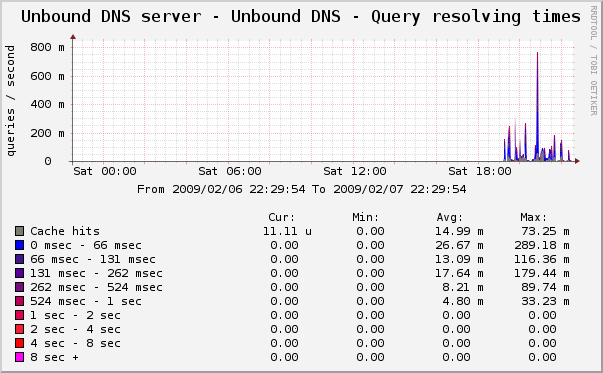 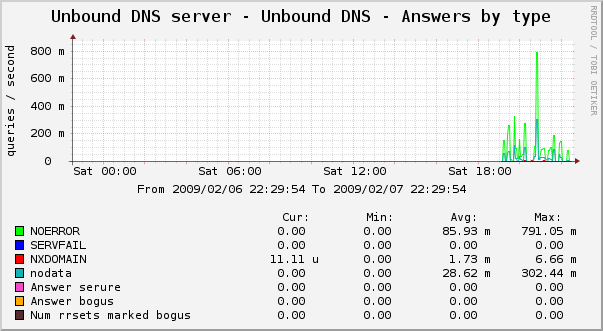